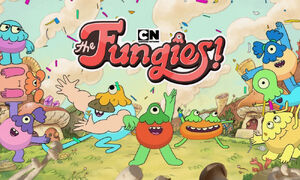 The Fungies is an American series premiered on August 20, 2020, on HBO Max.

The series explore the mythological metropolis of Fungietown through the wondrous and whimsical quests, introduces Seth, a lovable mushroom kid who lives in prehistoric Fungietown and loves science and discovery. In his search for the ultimate adventure, Seth often finds himself causing hilarious problems for the utopia and its colorful inhabitants — but as he comes up with a solution, Seth always finds a newfound emotional understanding.

Get ready for The Fungies!

The Fungies Wiki is a collaborative community run by fans, for fans! We aim to document everything relating to The Fungies!. We currently have a total of 178 pages.

Go to these sites for info or for help with your own wiki!

Community content is available under CC-BY-SA unless otherwise noted.
Advertisement